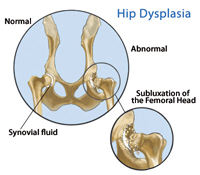 Although most commonly found in larger breeds, HD has been diagnosed in several Toy Breeds and may be undiagnosed as testing in rare.

Hip Dysplasia is a terrible genetic disease because of the various degrees of arthritis (also called degenerative joint disease, arthrosis, osteoarthrosis) it can eventually produce, leading to pain and debilitation.  (Excerpt from the Orthopedic Foundation for Animals) 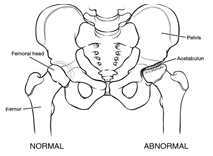 Legg-Calve-Perthes Disease (LCP) is a disorder of hip joint conformation occurring in both humans and dogs. In dogs, it is most often seen in the miniature and toy breeds between the ages of 4 months to a year.

LCP is believed to be an inherited disease, although the mode of inheritance is not known. Because there is a genetic component, it is recommended that dogs affected with LCP not be used in breeding programs.   (Excerpt from the Orthopedic Foundation for Animals) 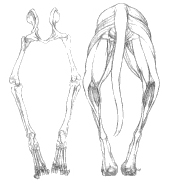 The patella, or kneecap, is part of the stifle joint (knee). In patellar luxation, the kneecap luxates, or pops out of place, either in a medial or lateral position.

Bilateral involvement is most common, but unilateral is not uncommon. Animals can be affected by the time they are 8 weeks of age. The most notable finding is a knock-knee (genu valgum) stance.

The patella is usually reducible, and laxity of the medial collateral ligament may be evident. The medial retinacular tissues of the stifle joint are often thickened, and the foot can be seen to twist laterally as weight is placed on the limb.  (Excerpt from the Orthopedic Foundation for Animals)