Inherited Deafness in Dogs: What You Should Know and Why - Dr. Aubrey Webb, DVM, PhD (Neuroscience), ABVO Resident in Ophthalmology 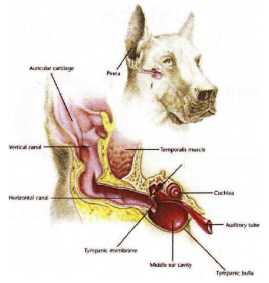 Dogs, like humans, are able to hear by conve1iing sound vvaves into electrical signals that are transmitted to the brain, where sound is perceived and interpreted.

The ear is divided into the external, middle and inner ear compa1imen,ts. The external ear includes the outer skin and cartilage, known as the pinna or auricle. The pinna is what we commonly think of when we speak about an animal's ear. Also making up the external ear compa1iment are the vertical and horizontal ear canals, through vvhich sound waves travel to the eardrum (tympanic membrane).   Here the sound waves 'beat' on the 'drum' to cause movement of the tiny bones in the middle ear.

The middle ear compartment is a small air-filled space within the temporal bone of the skull. Tiny bones (the auditory ossicles) housed vvithin the middle ear are named according to their appearance: "hammer" (mal­leus), "anvil" (incus) and "stirrup" (stapes). The hammer comes in contact with the eardrum and butts up against the anvil. The anvil butts up against the stirrup. Sound waves make the surface of the eardrum move in and out, which causes mechanical movement of the ham­mer then, in a domino effect, movement of the anvil, then the stirrup. The base of the stirrup butts up against a thin membranous window of the inner ear.