In 1985, Dr. John Cummings and his colleagues described a new hereditary disease in Japanese Chins, GM2 gangliosidosis.  Subsequent studies by Dr. Philip Wood established that the disease was caused by a deficiency of an enzyme that is critical to normal brain function.

Brain cells have a surface membrane that acts like the skin of the cell.  Within that membrane, there are complex molecules called gangliosides which are important for the ability of brain cells to communicate with each other.  That communication between brain cells is what allows us to move, feel, and think.  Nothing lasts forever, and the gangliosides in the brain cell membrane eventually wear out and have to be replaced.  Worn out molecules in any cell are sent to the lysosome, the cell’s recycling center, where enzymes break down the old molecules.  The building blocks can then be reused to make new complex molecules.

If a dog is lacking one of these enzymes, then the recycling process may hit a road block.  Unable to breakdown the worn out molecule, it accumulates or is “stored” in the recycling center; hence diseases of this type are called lysosomal storage diseases. The arrow in the slide shown here points out material that built up in a brain cell of a dog that died from a storage disease.  The disease is named for the "stuff" that builds up in the cell, and in gangliosidosis, the stuff that builds up is the gangliosides.   Before we knew what was building up, the diseases were named after the physicians who discovered them.  Gangliosidosis was called either Tay-Sachs disease or Sandhoff’s disease.

Since the problem is with the recycling of molecules, the brain cell can function fine for a while.  It is as if you were still able to go the store, shop, and cook dinner, but you were not able to take out the garbage.  You could continue to make dinner for a while, but eventually the garbage would build up in the kitchen until you couldn’t get to the stove or the refrigerator and couldn’t cook anymore.  The cell doesn’t have the option of ordering in a pizza, so when this happens the result is a progressive brain disease.

What are the symptoms of gangliosidosis?
Because it takes time for the storage material to build up enough to interfere with the cell’s function, dogs with gangliosidosis are normal at first.  Somewhere around a 1-1½ years of age, they   become mentally dull, may not come when called or ask to go out to potty.  They may develop a goose-stepping gait and have problems with their balance.  Their head may shake especially when they try to eat.  As the disease progresses, their coordination worsens and they become weak.  Eventually, they become totally unaware of their surroundings and their quality of life deteriorates until euthanasia must be considered.

What else can look like gangliosidosis?
Many diseases can cause loss of coordination and altered consciousness in a dog.  This would include infections of the brain such as canine distemper, metabolic diseases such as liver shunts or low blood sugar, or toxicities such as lead poisoning.  Dogs with gangliosidosis show atrophy of the brain on MRI scans, but this is a non-specific finding seen in many diseases.  If necessary, your veterinarian can refer you to a board certified neurologist who can aid in diagnosing gangliosidosis.  A directory to locate a neurologist near you can be found at www.acvim.org under “Search for a Specialist”.

Is this a hereditary disease?
Yes, gangliosidosis is a recessive hereditary disease.  In recessive diseases, both parents are usually perfectly normal all their lives.  That’s because all genes come in pairs and the normal parents have one normal gene that allows them to produce the enzyme they need.  The other gene, however, is the bad gene that cannot produce the enzyme.  Each parent passes on one of their genes to their offspring. If a pup is unlucky enough to get the bad gene from each parent, then it cannot produce any enzyme and comes down with gangliosidosis.

Is there a DNA test?
Recently, researchers at the University of Missouri found the mutation responsible for gangliosidosis in Japanese Chins.  A DNA test is now available. During November 2010, samples were recruited from over 100 Chins from many different locations and tested for presence of the mutation. Carriers were found in this survey, and we believe it would be prudent for Japanese Chin breeders to test dogs that they intend to breed.  Wise consideration of the DNA test results will allow Chin owners to make informed choices when choosing which dogs to breed, and avoid producing puppies destined to become affected with this disease. Carriers of the mutant gene can be used for breeding, but should be bred to a dog that is tested clear of this mutation. By doing this, no affected dogs will be born but the desirable traits and genetic diversity that these dogs offer the breed will be maintained.

How do I test my dogs?
Testing is being offered through a partnership with OFA (Orthopedic Foundation for Animals) - the test can be purchased online at www.OFFA.org beginning December 10, 2010. OFA will send a kit and instructions to collect DNA using a cheek swab, the barcoded sample will be tested at the Animal Molecular Genetics Laboratory, and results reported to owners by OFA. The OFA staff is available for any customer support needs or questions. The test fee of $65 includes the test kit, DNA testing, a report certificate mailed to the owner, and listing on the online searchable database maintained by OFA (carrier and affected results are not publicly reported unless the owner chooses to have this information listed). Orders from outside the US are welcomed - many of the other DNA tests offered by OFA are being used by concerned breeders from all over the world, so we know that the process will work regardless of the owner's location.

Which dogs should be tested?
Any Japanese Chin can be tested for the GM2 mutation. Puppies can be tested as early as about 4 weeks of age. We recommend that dogs that are contributing to the gene pool, especially widely used stud dogs, should be tested so that informed choices that will avoid inadvertently producing affected offspring can be made. If both parents test normal for this mutation, there is no need to test the resulting offspring. If one parent is a carrier, breeders may choose to test the resulting puppies so that they know the genetic status of the pups as they make decisions about how each pup may or may not be included in future plans. While it would be difficult to endorse breeding two carriers to each other, if someone did choose to do this we would definitely recommend testing the resulting offspring to be sure a puppy destined to become affected is not sold to an unsuspecting puppy buyer. If a young dog is displaying symptoms suggestive of gangliosidosis or a puppy is DNA tested as affected/at risk, please This email address is being protected from spambots. You need JavaScript enabled to view it. for special instructions.

By using this new DNA test wisely, Japanese Chin fanciers can work toward eliminating this devastating disease from the breed while maintaining the genetic diversity and many positive traits that endear these dogs to their devoted owners. 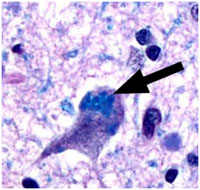