Endocardiosis in the Toy Dog by Dr. Leanne Bertani 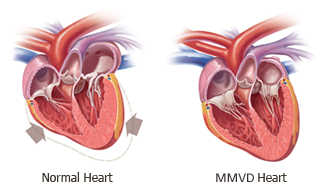 Atrioventricular Endocardiosis, or Myxomatous Valvular Disease, is a chronic degenerative disease affecting the mitral and tricuspid valves of the heart. It is the most common cardiac disease in small-breed dogs, and has a hereditary predisposition. The condition is caused by polysaccharide deposits in the valve leaflets that eventually distort the valves and cause them to leak. The leaks cause the heart to work less efficiently, and the increased workload may eventually lead to congestive heart failure.

The incidence of endocardiosis is estimated to be about 35% in all dogs over the age of 12, and about 5% of dogs in middle age. Unfortunately, the condition appears to have a greater incidence and an earlier onset in some dogs, particularly in toy breeds such as the Cavalier King Charles Spaniel, where 50% may have murmurs due to endocardiosis by the age of five. Other related breeds, such as the English Toy Spaniel and the Japanese Chin, are particularly at risk for increasing prevalence of early-onset endocardiosis if careful breeding practices are not followed. In breeds with small gene pools, it only takes a few affected "popular sires" to significantly alter the genetic make-up of the breed. The early-onset form of endocardiosis may drastically shorten a dog's life expectancy -- deaths due to endocardiosis have been reported in dogs as young as four years old.

The incidence of endocardiosis is also high in the miniature poodle, miniature pinscher, whippet, schnauzer, yorkshire terrier, dachshund, cocker spaniel and chihuahua, but usually at an older age. Some large breeds, such as German Shepherds and Afghans, may also be affected, usually in association with other cardiac conditions. In some studies, males are more affected than females by a ratio of about 1½ to 1.

Early-onset Endocardiosis and How to Prevent It

For now, the only way to prevent early-onset endocardiosis is by selective breeding. The condition has received the most scrutiny by the Cavalier community, as about 50% of Cavaliers in the United States have murmurs due to mitral valve insufficiency by the time they are five years old. It has been demonstrated in several studies that the tendency towards early-onset endocardiosis is inherited, and that its prevalence can be reduced by using older sires and dams that are free from disease.

One protocol, developed by a panel of cardiologists and geneticists at the request of the Cavalier King Charles Spaniel Club, USA, suggests using only the top 50% for breeding stock. For cavaliers, that would mean breeding only animals that are at least 5 years old and heart-cleared by a cardiologist. Knowing that it is not very practical to delay breeding a bitch for five years, a compromise protocol was suggested. The compromise protocol is to breed only animals that are at least 2½ years old, that have parents that are at least 5 years old, all of which are certified by a cardiologist as being murmur-free. Some cavalier breeders are presently working toward improving the longevity of their stock using this compromise protocol. There has been some difficulty in implementing the protocol on a wide scale, due to the limited breeding stock that meets the protocol. It is sometimes difficult to have sires and dams of the breeding animals certified by cardiologists, particularly when they are in the hands of different owners, or not even in the same country.

Some breeders are attempting to achieve similar results by loading their pedigrees with long-lived animals. Breed clubs and individuals have begun to maintain registries of long-lived dogs; there are registries of Cavaliers living to the age of 14, and of Japanese Chin living to the age of 12. Breeders are encouraged to keep longevity in mind when considering matings.

At the very least, fanciers of toy breeds should ask their veterinarians to pay special attention to the cardiac exams of their breeding animals, particularly the mitral valve area, and avoid breeding any dog that has onset of a mitral valve murmur prior to the age of five. In breeds predisposed to early onset endocardiosis, yearly examination by a board-certified cardiologist of all breeding stock over the age of 2½ is preferable, as is registration of those exams with the Orthopedic Foundation of America's cardiac registry.

Endocardiosis is sometimes referred to as "Mitral Valve Disease" or "MVD" by those in afflicted breeds, because the mitral valve is more commonly involved than the tricuspid valve. While there are other conditions that affect the mitral valve, a mitral valve regurgitation murmur in a toy breed dog is most likely due to endocardiosis. Therefore, the most common method of diagnosis of endocardiosis is by auscultation (listening with a stethoscope) for regurgitation murmurs of the mitral and tricuspid valves. If the origin and nature of the murmur is uncertain, sometimes an echocardiogram is done to verify the murmur's location.

Unfortunately, a dog may be affected for a couple years before the regurgitation is significant enough to produce a murmur, so the practice of using auscultation for diagnosis often delays identification of affected dogs until after they have already been used in a breeding program. There is some work being done to attempt to identify affected breeding stock at an earlier age than is possible by auscultation. Canadian researchers have been studying the use of color doppler as a means of early identification of endocardiosis. It is hoped that the disease can be diagnosed by echocardiogram at an early stage, either by measuring the degree of mitral valve prolapse or the degree of regurgitation.

Although there are some abnormalities that may occur in the electrocardiogram (EKG) of a dog with advanced endocardiosis, the EKG is often normal, particularly in the early stages of the disease, so an EKG is not a very useful screening method.

The use of DNA identification has also been entertained, but diagnosis via DNA is not likely close at hand, because the heredity of early-onset endocardiosis appears to be polygenic (due to more than one gene). There is one study that suggests that dogs with more severe disease have a greater number of endothelin receptors in their valve leaflets, but it is not practical to do mass screenings for that trait at this time.

Once diagnosed, it is recommended that the dog have a chest x-ray every 6-12 months, to monitor for enlargement of the heart. Affected dogs should be kept trim and should not have a salty diet. Mild exercise is encouraged, but animals that are in heart failure should avoid sudden, explosive exercise or any activity that induces shortness of breath.

At this time, medication is generally not recommended until the dog becomes symptomatic (shortness of breath, coughing) or has cardiac enlargement. Though there are some cardiologists who feel that earlier treatment (as soon as a murmur is heard) might increase longevity, it has not been proven. Studies are ongoing.

The most commonly used medications in symptomatic dogs are the ACE inhibitors, such as enalapril (Enacard, Vasotec), or Fortekor, which decrease the workload of the heart. Additions to the regimen may include diuretics such as furosemide (Lasix), or medications to strengthen the heart beat, such as digoxin (Lanoxin). These drugs should be used with caution if the dog has kidney disease, and the veterinarian may want to check bloodwork on a regular basis to monitor for kidney failure. If the dog gets into congestive heart failure despite these medications, it should see a cardiologist, and the addition of pimobendan (Vetmedin) should be considered to improve heart function.

Although surgical correction of the valve has been done, the procedure is far from routine at this time.

When the heart enlarges, it may compress the bronchus to the lung, causing coughing and wheezing. The enlarged heart may lead to congestive heart failure, and the back-up of fluid into the lung, interfering with oxygenation, and causing shortness of breath. The congestion may also cause abnormalities in kidney or liver function.

Because endocardiosis distorts the valves, it can also be complicated by endocarditis, a bacterial colonization of the valve that can cause septicemia (blood poisoning) and further damage to the valve. For this reason, dogs with valvular disease are often required to take antibiotics prior to surgical procedures or dental work.

An enlarged heart is susceptible to arrhythmia, irregularities in the heartbeat due to disruption of the heart's electrical system. One symptom of this is syncope (fainting). If this occurs, the veterinarian may have to do an electrocardiogram and prescribe additional medication to control the arrhythmia.

Another complication is rupture of the chordae tendonae. These are the struts that hold the valves in place. Rupture of the tendonae may totally disrupt the path of blood flow in the heart, sometimes even causing sudden death.

The prognosis of an individual dog is difficult to predict, because the disease seems to progress faster in some dogs than others. Generally, the earlier the onset of a murmur, the lower the life span. But there are many exceptions to the rule, and some dogs that had mitral regurgitation murmurs at the age of four have gone on to live to a ripe old age.

The best treatment is prevention. Choose your breeding stock wisely. With every breeding, keep in mind that many of the future offspring will likely end up in someone's home as a beloved family member, hopefully living a long and happy life.